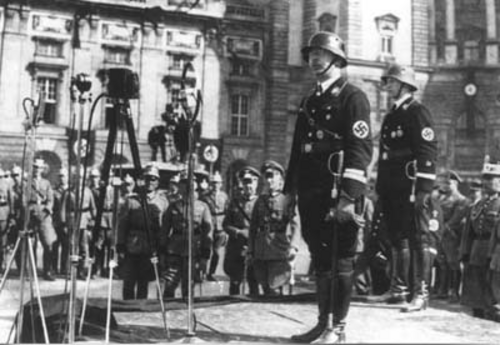 March 15, 1938: Heinrich Himmler, Reich SS Leader and Chief of the German Police, on Heldenplatz while the police takes the oath on Adolf Hitler. (Photo: DÖW)

Within a short period of time, the Gestapo - established in 1933 after Hitler's assumption of power in Germany - became an effective political police force. Until 1939, the Gestapo was organizationally part of the Secret State Police Office (Gestapa) in Berlin. In 1939, the Reich Main Security Office (RSHA) was established upon a directive by Heinrich Himmler. In it, Gestapo, Criminal Police, and SS Security Service were merged. The Gestapo operated without any institutional supervision and was endowed with special rights.

It monitored and persecuted those individuals the Nazi state had declared "enemies of the state and the people" or classified as potentially dangerous: political dissidents, Jews, people who violated the norms of the Nazi state, social fringe groups, forced laborers.

After the outbreak of war in fall 1939, the Gestapo was crucially involved in the suppression of resistance in the occupied territories and in the monitoring of foreign forced laborers as well as, starting in 1941, in the mass murder of the European Jews.

The Gestapo was by no means "omniscient" and "omnipresent." This myth was possible because functionaries of the Nazi Party, but also average citizens were prepared to denounce anti-Nazi behavior. Snitches and denunciators contributed significantly to the functioning of the Gestapo's control and persecution mechanism.

The Establishment of the Gestapo Leitstelle Vienna (regional headquarters) >>