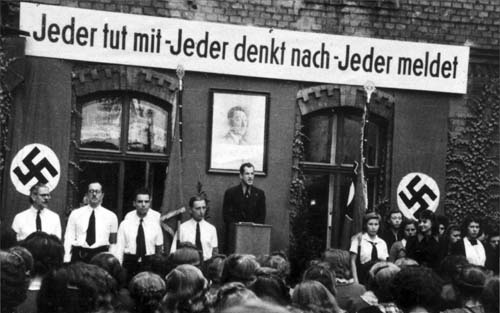 "Company appeal" organized by the "German Labor Front" (DAF) at a Viennese company.
With 23 million members the largest Nazi mass organization, the DAF attempted through such events not only to conjure up the "Volksgemeinschaft" (lit.: people's community), but also to gain political control over the employees. (Photo: DÖW)

The National Socialist dictatorship was accepted as a legal form of governance by a majority of the Austrian population. With welfare promises, material advantages, sophisticated propaganda as well as with initial foreign-policy and military successes, it managed to win over not only NSDAP party supporters, but also "adherents" of all convictions. The majority simply put up with the regime's obvious legal breaches and terrorist measures as well as with institutions such as the Gestapo.

Only few people possessed the courage to get organized in resistance groups and to actively fight the regime. Resistance fighters operated largely isolated from the general population and found themselves confronted with the regime's numerous informers and snitches.

Almost all larger resistance groups were broken up by the Gestapo. In this context, the use of "confidants" and informers was of crucial significance. To this day, the number of individuals who had been active as Gestapo informers is unclear. Quite a few who provided informer services were forced to do so as a result of threats and blackmail, but some of them "worked" for the Gestapo also to obtain financial benefits and boost their own significance.

The Intelligence Department (Nachrichtenreferat) of the Gestapo Headquarters Vienna played an important role in uncovering resistance groups. It was directly subordinated to the Gestapo head. Not only did its officers have snitches infiltrate resistance groups, but they also produced "enemy" leaflets, which they used as means of provocation.

"They Took the Other Road" - Organized Resistance in Austria >>