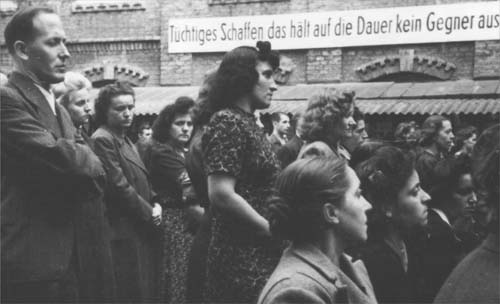 "Factory cells" belonging to the Nazi mass organization "German Labor Front" (DAF) had an important role in the surveillance of the population. (Photo: DÖW)

The better part of the Gestapo's bureaucratic routine consisted in tracking down mass offenses that came as a result of oppositional behavior displayed by, in most cases, politically unaffiliated citizens. These offenses ranged from anti-Nazi utterances (railing against Nazi politicians, spreading of rumors and jokes critical of the regime), nonconformist demeanor displayed by young people and prohibited listening to foreign radio stations all the way to friendly or helpful behavior toward people who stood outside the "German Volksgemeinschaft" (lit.: people's community), e.g.: Jews or "foreign workers".

Informers and denunciators made it possible for the Gestapo to act as an instrument of surveillance over the most private areas of society and to rigorously persecute the smallest violation of the Nazi system's rules.