With more than 900 employees, the Gestapo Headquarters Vienna was larger than its counterpart in Berlin. In 1938, the most important key positions in the Gestapo were filled with officers from the "Altreich" (Old Empire). Eighty percent of the officers and employees were recruited from the Austrian police. On the management level the ratio of Austrians was almost seventy percent; toward war end, it increased to over eighty percent.

Police expertise and willingness to identify with the Nazi regime were decisive for the further employment of former Austrian police officers at the Gestapo.

Daily, between 450 and 500 persons sought out the Gestapo Headquarters: some tried to obtain information on the fate of their arrested relatives, most were summoned for witness examinations resp. warnings. In total, 40,000 to 50,000 individuals were listed in the files of the Vienna Headquarters.

Department II, as of 1943 Department IV, which was divided into different sections, fought against all "endeavors hostile to state and party" and persecuted Socialists, Communists, Christian-Socials, Monarchists, Jews, Jehovah's Witnesses, homosexuals, foreign forced laborers as well as people who were accused of offenses against Nazi regime rules. 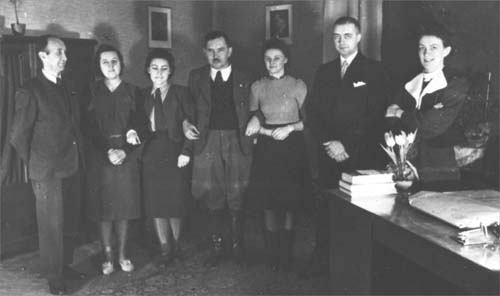