The National Socialist war of conquest also brought about a radicalization and brutalization of Gestapo methods. Members of the Gestapo were involved, among other things, in the murder of Jews in Poland and the Soviet Union, in the secret-service control of the occupied territories as well as in the ruthless fight against local resistance movements.

At the Gestapo Headquarters Vienna, Gestapo officers continued their activities to the very end: they tortured prisoners in the most brutal manner and participated, for instance, in the execution of the resistance fighters Major Biedermann, Captain Huth, and First Lieutenant Raschke on April 8, 1945 in Floridsdorf.

Starting in January 1945, Gestapo members tried to erase the traces of their crimes through systematic obliteration of the records - a task the inmates of the "Arbeitserziehungslager" (labor camp) Oberlanzendorf had to carry out - and to escape or go into hiding with the help of forged documents. 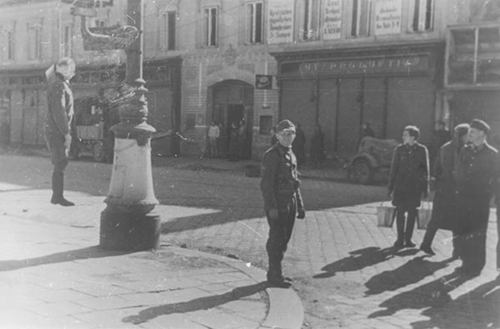 The last Gestapo atrocity took place in Vienna on April 8, 1945 when the Austrian resistance fighters Major Karl Biedermann, Captain Alfred Huth, and First Lieutenant Rudolf Raschke were executed by an SS commando under Otto Skorzeny on Floridsdorfer Spitz (21st district) because of their intention to surrender to the Red Army without struggle. By order of the last Viennese Gestapo head, Rudolf Mildner, Gestapo officers under SS Obersturmführer (senior storm leader) Franz Kleedorfer carried out cordoning and execution. (Photos: DÖW)