An exhibition by the Documentation Centre of Austrian Resistance 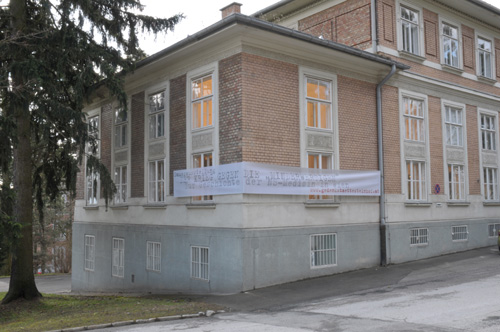 In the National Socialist system, medicine took on a new task: the "weeding out" of people designated as "inferior." There was no room in the performance-orientated Volksgemeinschaft (people’s community) for the handicapped, the mentally sick, for members of social fringe groups, and nonconformists. They were persecuted, imprisoned, and abandoned to annihilation.

The Heil- und Pflegeanstalt "Am Steinhof" (today's Klinik Penzing) developed in the years after the Anschluss of 1938 into the Viennese center of National Socialist medical murder that was to take the lives of far more than 7,500 Steinhof patients:

Starting out from the occurrences at the Steinhof clinic compound, the exhibition in Pavilion V of the Penzing clinic offers a comprehensive overview of the circumstances and consequences of Nazi medical crimes in Vienna.

Der Krieg gegen die "Minderwertigen" / The War against the "Inferior"
Catalogue to the Exhibition of the Steinhof Memorial at the Otto Wagner Hospital of the City of Vienna >>
Unterstützt von: